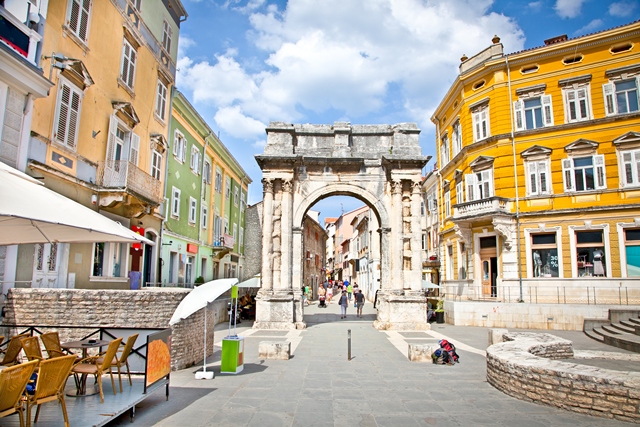 The Istrian Peninsula is famous for its cities and its rich history, and a city which certainly stands out is Pula.

Pula is situated in the south-western part of the Istrian Peninsula and it is its largest city, which attracts great number of tourists as with its well-preserved nature so with a wide diversity of historical attractions that will certainly remain deep in the memory of those who visit it. Apart from being the largest city of the Istrian peninsula, Pula also represents one of the most popular tourist and cultural centres.

Pula is a city dating from 3000 years ago, situated at Kastel hill, which was the spot of the first urban settlement, the fortress of Histria.

Pula started to develop during the era of the Roman Empire, when some of the most valuable and the most famous monuments in Croatia were built.

The original name of Pula, at the time of the Roman Empire, was Colonia Pietas Iulia Pola. In the 7th century, Pula started to get populated by the Croats and the Slavs.

The Venetians were not very much interested in the city, thus they did not have further ambitions to invest into its development, as in the period when they were populating Pula the city was just a transit spot on the way from Venice to the eastern Adriatic coast.

college definition essay examples.
The Arena of Pula is one of the 6 largest Roman amphitheatres in the world.

From 1815, and until the end of the World War I, Pula was a part of the Austrian coast (Küstenland).
During the air raids in the World War II Pula was very damaged, but in the first half of the 20th century, the city started to redevelop, and it stood out as the largest city at the Istrian peninsula, but also as the tourist centre and the centre of the shipbuilding industry.

Mediterranean climate, clear sea, preserved nature, rich history, as well as good traffic connections are just some of the basic advantages for development of tourism in this city.

Pula offers numerous possibilities, as for the pleasant vacation so for the congress tourism, and the tourists have at their disposal great number of hotels, camps, tourist resorts and marinas.

What to see and visit? See the impressive sites of Pula.

The most famous landmark of Pula is certainly the Arena dating from the 1st century.

The Arena was a place for organization of events such as gladiatorial combats, knight’s fighting, fighting with wild animals which, at ancient times, were the most important social events.

Today, the Arena of Pula is a place where various shows and concerts are taking place, and can seat roughly 5,000 spectators. In the underground rooms of Arena, there is a permanent exhibition “Olive growing and viticulture of Istria in Ancient times”, and which is open for visitors during the whole day.

Besides, the Arena of Pula is one of the 6 largest Roman amphitheatres in the world.

Another witness of Roman stay in this region is the Small Roman Theatre which was built within the city ramparts, at the bottom of Kastel. The theatre was most probably built in the 1st century, and had a capacity of some 5,000 seats.

However, today only a segment is visible, as archaeological excavations are still under way.

An unavoidable attraction of Pula is also the Temple of Augustus, built at the beginning of the 1st century AD, and which is located at the city square Forum.

The temple was dedicated to the goddess Roma and the emperor Augustus, and with the time, its functions were changing (it was a church, a grain warehouse, museum of stone monuments, etc.).

Today, it is an exhibiting room for small exhibition of antique sculptures. Next to the Temple of Augustus, there was another identical temple, of which today we only have one wall left.

The Forum is the main city square, which is the gathering place, as for the citizens so for the tourists.

Triumphal Arch of the Sergi – Golden gate was constructed by the Sergi family, in memory of three brothers that were engaged as high officials. It is supposed to have been built between 29 – 27 year BC. The Gate was leaning against the city gate Porta Aurea and ramparts, which were pulled down at the beginning of the 19th century with the purpose of expanding the city.

The Gate of Hercules is the oldest ancient monument in Pula, and at the same time, the oldest city gate in this region. The gate is of a simple design, with a head of Hercules in the middle. Hercules was considered the patron of the city of Pula.

The Twin Gates is another witness of ramparts surrounding the city during the ancient times and the mediaeval period, when the city was being entered into through 10 gates.

It was constructed during 2nd and 3rd century, and under the gate, there are the remains of the mausoleum dating from the period around 1st and 2nd century.

The Arsenal and the Shipyard was opened in 1856, and it served as the Austrian Military Navy base. Its construction opened the era of faster and more expanding construction of buildings exploited by the members of the Austro-Hungarian navy fleet.

Another witness of turbulent history of Pula is the Historical Museum of Istria located in the adapted Venetian fortress.

This museum keeps the heritage of the period from the late middle ages to the new age.

The exhibition comprises of 40,000 exhibits, and which make a part of collection of armaments, military equipment, seamanship, maps, postcards, etc.

For the fans of sea and freshwater animals, an unavoidable place to visit is certainly the Aquarium Pula which comprises some 60 pools, located in the Austro-Hungarian Fortress Verudela built in 1886 at the peninsula having the same name, 3 km far from the centre of Pula.

Sightseeing of Pula would certainly be incomplete without visiting some of its most famous parks. The Park under Arena is one of the most beautiful parks in Pula, which is situated under the very Arena, and dates from the 1930s.

Another famous park in Pula is the Park of Petar Kresimir IV, dating from 1953, and which, in 1960, was enriched with a fountain made of natural Istrian stone, as a symbol of bringing drinkable water to Pula. Apart from this fountain, the park is also recognisable for the Roman mausoleum dating from the 1st century. There are also places like the Tito‘s Park and the Naval Park, as well as the promenade Lungo mare.

Pula, also known as the city-museum of Istria with its numerous attractions, but also a city with great number of excellent hotels and venues, is an ideal place for holidays and an excellent place for organization of corporate events, incentive trips and all other kinds of gathering and entertainment of the employees.

Those that have already visited this city-museum will probably revive nice memories, and for those that still haven’t been here, we hope that they will soon get the idea to do it.

The “Luminous Giants” is the name of the project starting in May, 2014, and which will, for the first time in the world, illuminate the cranes of the working shipyard. The world famous designer of the illumination, Dean Skira, with a help of sponsors and the employees of the shipyard “Uljanik”, will illuminate the cranes of this shipyard, and which are certainly the distinguishable symbol of Pula. The “Luminous Giants” have a sophisticated system of remote control of light and scenography, and can be illuminated with even 16,000 combinations of various colours.
www.pulainfo.hr