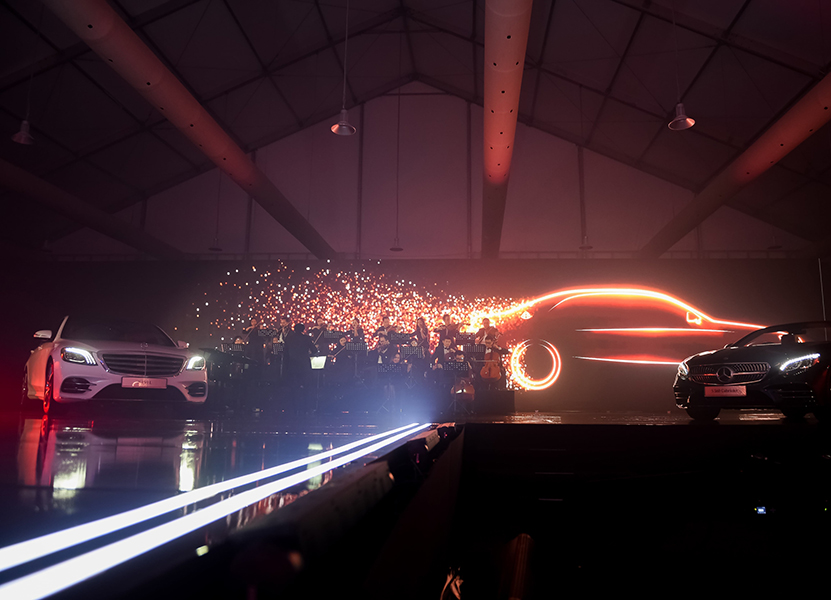 Last year Mercedes-Benz Malaysia introduced its four new S-Class models by throwing a four-day event that, to put it mildly, got our full attention and more importantly, the full attention of the event attendees, allowing them to experience something extraordinary that utilized all of their senses.

Since this class is the most luxurious one, the decision was made for everything to center around it. From the event’s venue through the catering and the audio-visual effects to the attendees themselves. In short, the absolute focus was placed on creating the guest experience!

“Das Beste oder Nichts” which literally means “The Best Or Nothing” is the Mercedes motto.

What was done to create the experience?

Most events intended to introduce new car models focus on functionality — the main idea is to showcase the car and then explain its technical features to the audience. Instead, it was decided to make this event as personalized as possible, involving the attendees and giving them a sense of exclusivity.  Typical places for launching cars like dealerships, convention centers, trade shows, and hotels were avoided. The event was planned to take place in an event tent set up next to the KLCC Twin Towers, two 88-floor skyscrapers considered to be the roof of Malaysia, a magnificent structure built to resemble the Empire State Building, Eiffel Tower, and Burj Khalifa. Continuing down the organization road, they went a step further and relied on the research conducted by psychologist Silvia Álava that revealed that people recall 35% of what they smell, five percent of what they see, two percent of what they hear, and one percent of what they touch. And this was the very essence of the entire event — the main idea revolved around the five senses!

Smell has the power to transport, and different scents provoke different feelings. For this purpose, the hosts hired a perfumer tasked with creating fragrances that remind of entering a luxurious, lavish hotel. Every day they imported fresh flowers that they arranged on the tables where the guests were sitting. 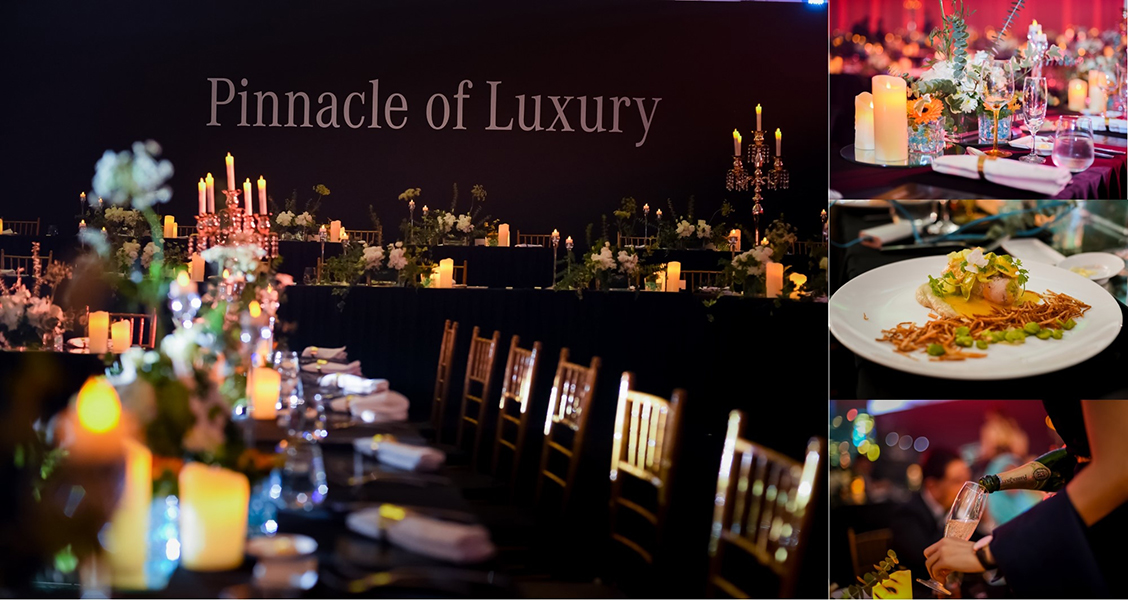 They used the fact that lighting affects the mood. They used smart lighting that guided the guests away from the entrance to the main room. The spotlights were aimed at the cars and LED screens on the walls. The guests were surrounded by 270° LED displays showing the city and aurora borealis. Chandeliers and candles gave away a sense of luxury and uniqueness. Large crystal chandeliers adorned the lobby, and 50 custom-made chandelier lamps decorated the tables, exuding elegance and luxury. 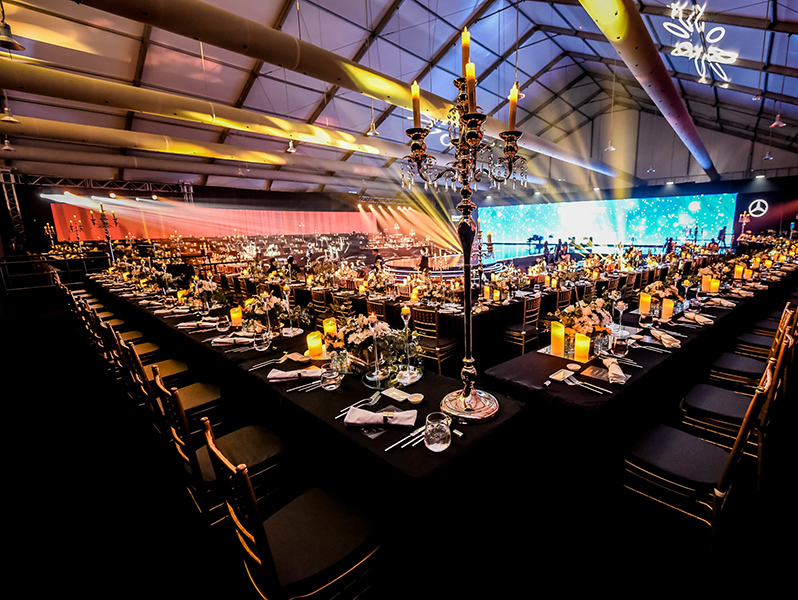 A sound engineer was hired to oversee the acoustics of the orchestra made up of 24 musicians and make sure that the sound is perfect, despite the fact that the event took place in a tent. The orchestra conductor was Datuk Mokhzani Ismail, the music director of the National Orchestra and prestigious conductor of the Malaysian Philharmonic.

Six classic Mercedes-Benz models were borrowed from collectors. The hosts hired specialists for transporting and caring for these types of vehicles, in addition to insurance. The memory lane hall where these cars were displayed allowed the guests to learn about the brand’s history and legacy. The attendees could touch and “feel” the cars, and the older guests who used to drive them remembered what it was like. 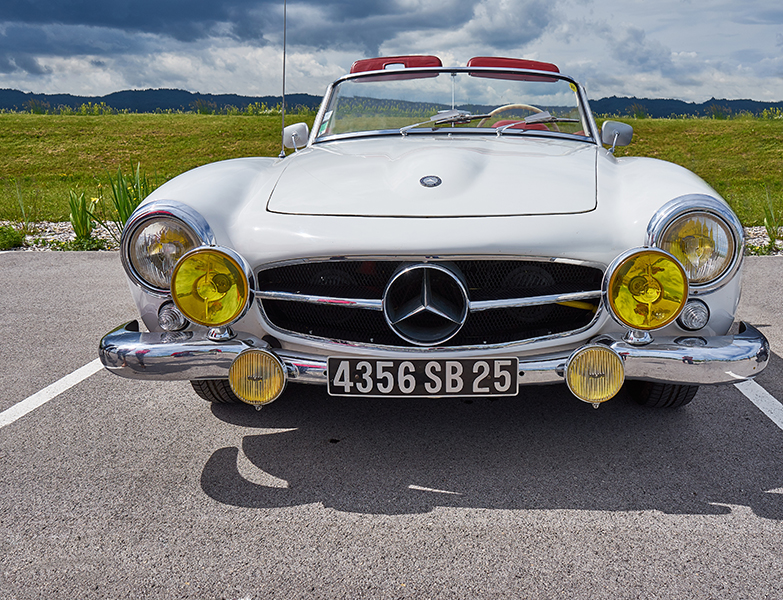 The award-winning Michelin star chef Nathalie Arbefeuille created a culinary feast with four courses. Every day saw a different menu served, and every evening menu reflected the diversity of the four vehicles that were being showcased. The meals were prepared at a different location 12 km away and transported to an improvised kitchen in the tent so that it would look like they were prepared on the spot, just like on first-class flights.

· The modern automobile was invented by Karl Benz, but his wife funded his work.

· Karl Benz got the first driving license ever!

· Mercedes-Benz vehicles are manufactured in 30 countries around the world.

· These were the first cars with brakes on all four wheels.

· The first car in the country of Nepal was a Mercedes-Benz, given to its king in 1940.

A mobile stage was built with six hydraulic mechanisms that served as stages for the four new models and the orchestra. Professional drivers maneuvered the cars in the narrow space on the stage. Since the guests included members of royal families, heads of states, and business elite, strict security measures were coordinated with the traffic police and emergency services.

The magnificent event most certainly gave results. The event’s four days saw a total of 1,200 people, S-Class sales rising by 12.8% in the first three months after the event compared with pre-event sales, and the brand’s Facebook and Instagram pages gained 2,543 new followers! It goes without saying that the attendees’ expectations were exceeded because an event like this one can never be forgotten. Without a doubt, the experience was extraordinary! 🙂

A billionaire from Abu Dhabi placed ordered a custom-made Mercedes- Benz with a gold decorated exterior. The whole exterior was covered with white gold worth $2.5 million.