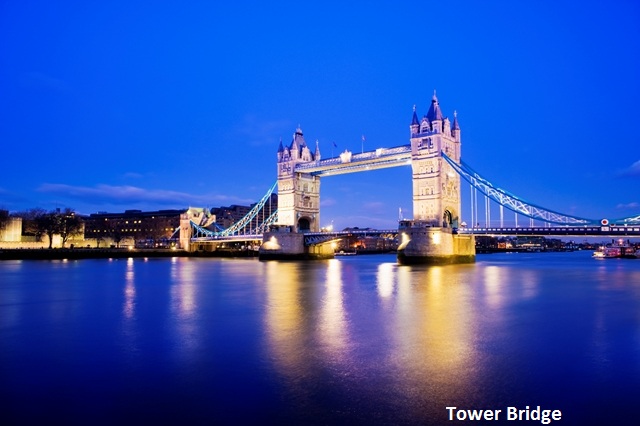 What comes to your mind first when you say London’s most famous and most recognizable sights? Big ben, Tower Bridge, Buckingham Palace, London Eye, Trafalgar Square…

Wouldn’t be memorable and so wonderful to host or be invited to some corporate party at one of the iconic symbol of London – Tower Bridge?

Tower Bridge has been named ‘Best Unusual Venue’ at the 2012 Event: UK Awards.

This follows Tower Bridge winning the 2011 Event Magazine Award for Event Space of the Year.

The most famous bridge in the world houses stunning venue areas, each one a unique and memorable setting for both private and corporate events.

There are three areas of Tower Bridge, that could be used for events.

The panoramic high-level Walkways and the majestic Victorian Engine Rooms are available for private evening hire, while the North Tower Lounge is also available for smaller daytime functions and weddings.

The award-winning panoramic Walkways are available to hire in the evening for events.

So whether it’s for a cocktail party, product launch or dinner, the Walkways provide the perfect backdrop for evening events.

From their stunning viewpoint, 42 metres above the Thames, guests are treated to a glimmering panorama of London’s romantic night-time scene. Spanning between the two towers of the Bridge, each of the Walkways provides an impressive platform from which to enjoy a breathtaking view of London and The Thames.

The spectacular view from the West Walkway reaches beyond The Tower of London and St Paul’s Cathedral as far as Westminster and The London Eye.

The skyline from the East Walkway stretches from Butler’s Wharf and St Katherine’s Dock to high-rise Canary Wharf and historic Greenwich.

The engines provide a striking backdrop for any event requiring something out of the ordinary, ensuring a memorable experience for all guests.

The rooms comprise a series of immaculate chambers, whose spacious yet comfortable proportions promote a friendly, sociable atmosphere. The historic Victorian Engine Rooms lend themselves easily to both standing receptions and seated events.

In addition to the giant engines, the rooms also present a range of intriguing exhibits which ensure that conversation will continue to flow well into the night.

This unique venue area within the North Tower of the Bridge provides a versatile, interesting space for informal meetings and private receptions.

Beautifully decorated, this showcases the Bridges’ iconic and elegant architecture. Original floor-to-ceiling windows are a striking feature of this area, introducing inspiring views of Tower Bridge and the Thames.

Steeped in history, yet contemporary in feel, Tower Bridge offers this comfortable and relaxed space for both daytime and evening events.

It was a huge challenge how to build a bridge downstream from London Bridge without disrupting river traffic activities.

It took 8 years, 5 major contractors and the relentless labour of 432 construction workers to build Tower Bridge.

Two massive piers were sunk into the river bed to support the construction and over 11,000 tons of steel provided the framework for the Towers and Walkways.

This framework was clad in Cornish granite and Portland stone to protect the underlying steelwork and to give the Bridge a more pleasing appearance.

When it was built, 1894, Tower Bridge was the largest and most sophisticated bascule bridge ever completed (“bascule” comes from the French for “see-saw”). These bascules were operated by hydraulics, using steam to power the enormous pumping engines. The energy created was stored in six massive accumulators.

Despite the complexity of the system, the bascules only took about a minute to raise to their maximum angle of 86 degrees.

Today, the bascules are still operated by hydraulic power, but since 1976 they have been driven by oil and electricity rather than steam. The original pumping engines, accumulators and boilers are now exhibits within the Tower Bridge Exhibition.

Tower Bridge has a fascinating history, which is explored in full in The Tower Bridge Exhibition. Here are a few interesting facts you may not have known:

1910  –  the high-level walkways, which were designed so that the public could still cross the bridge when it was raised, were closed down due to lack of use.

1912 – during an emergency, Frank McClean had to fly between the bascules and the high-level walkways in his Short biplane, to avoid an accident.

1952  –  a London bus driven by Albert Gunton had to leap from one bascule to the other when the bridge began to rise with the number 78 bus still on it.

1977  –  Tower Bridge was painted red, white and blue to celebrate the Queen’s Silver Jubilee. (Before that, it was painted a chocolate brown colour).

1982  –  Tower Bridge opened to the public for the first time since 1910, with a permanent exhibition inside called The Tower Bridge Experience.