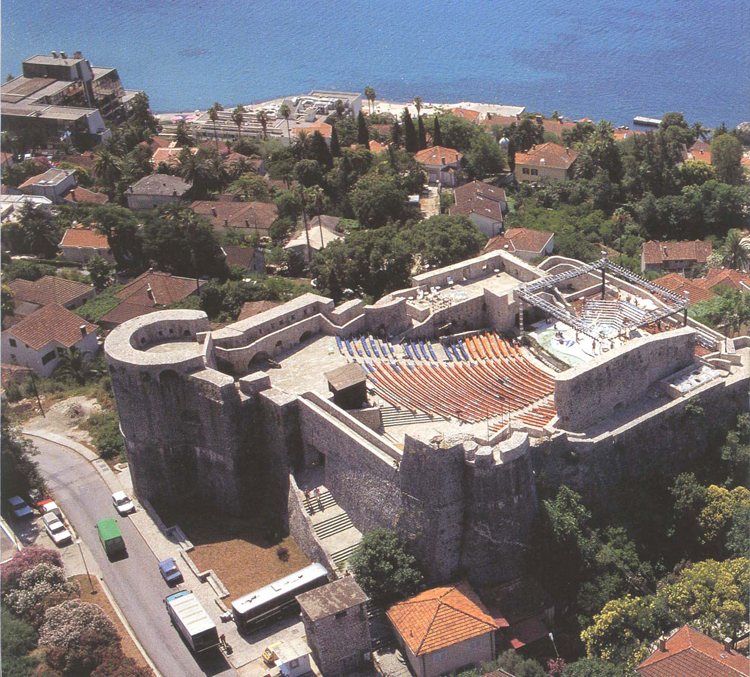 Montenegro as a tourist destination is characterised by small ground surface of the country that has so much to offer.

A visitor can arrange for himself his morning coffee at one of many beaches of the Budva Riviera, a lunch at the Lake Skadar, and dinner beside a fireplace on slopes of the magnificent mountain Durmitor.

Turbulent history of this small country left behind a priceless treasure reflected in historic monuments all over the country. Some remain living in these modern times, opening their doors to everyone interested, among them to the corporate events organizers, too.

KANLI TOWER – It was built on a solid limestone rock, at 85 metres above the sea. The Kanli Tower was first mentioned in written documents by the Turkish traveller and writer Evliya Celebi by mid-17th century. It is supposed that it was built in mediaeval times, and it got its present shape in the period of the Turkish rule by mid-16th century.

Today it boasts with the most beautiful summer stage on the Adriatic, with no less than 1005 numbered seats.

A seat is made – how else? – out of stone onto which they place a rubber pad (mat) at the time of holding various festivals, such as Herceg Novi Film Festival, onse for the Sunčane Skale, the Guitar Art Summer Fest, and all sorts of other events.

In organizing some kind of event it is advisable to know that weather conditions in Herceg Novi are rather changeable, so that organization of event is quite demanding in terms of effort and means, but it all pays off in the end. The stage with a view on the Bay of Kotor, the Luštica, the Prevlaka, and over the rooftops of the Old Town, surely emanates an uncommon and distinct ambience.

FORTRESS CITADEL, BUDVA – The mediaeval castle in the town of Budva, dedicated to St. Mary, renown today as Citadel, is the most monumental building within the Budva town walls.

The complex of buildings is completely autonomous in architectural sense, and it houses the ramparts, remnants of the mediaeval St. Mary’s church, gates, several plateaux, and former barracks.

The restaurant on the first floor is an ideal place for assemblies in its special setting and intimate private dining rooms, along with supreme culinary skills and extra good service.

The restaurant makes one single unit with a spacious terrace on the eastern tower, where one gets a fascinating view onto the island of St. Mark and the sea offing.

ŠIPČANIK WINE CELLAR – The cellar was opened by the end of 2007, after the first phase of reconstruction which lasted for more than a year, with 2 million Euros invested by “Plantaže“.

The complete project includes the planning of the surrounding area. Šipčanik Hill is on the east side of Podgorica, leaning on the complex of vineyards of the Ćemovsko Field.

The fortress, situated on the very top, opens up to the beautiful view of the Lake Skadar and the city of Podgorica. The cellar is at the average depth of over 30 metres. It is in the shape of a tunnel which is 356 metres long, its average width is 13.5 metres, and its height is 7 metres.

In the Šipčanik Cellar, on the surface of almost 7,000 square metres, numerous events can be organized, such as receptions, presentations, and corporative celebrations, including the wine tasting.

GOSPA OD ŠKRPJELA – The island facing the town of Perast is an artificial island made by the end of the 15th century. According to a legend, brothers Moršić found there a gobelin of Lady (Gospa).

The gobelin is autoportret, which was made from Lady’s hair, while she was waiting for her beloved. The townspeople of Perast decided to erect a Serbian Orthodox temple dedicated to Virgin at that spot.

The great seafarers coming to the Bay of Kotor would bring along some stones in their sailboats and then they would throw them into the sea at that spot. Once the island was created it was not long before the church was built as well. The custom survives even today. The Perast Festivities, held on July 22, is a traditional manifestation when people join their boats in Perast.

The boats are first decorated and then some stones are put on deck. After cruising along the Perast coast, everyone heads to the island. There the jubilation starts and everyone throws stones into the sea around the island.

This unique island on the Montenegrin coast offers an exceptional experience when organizing assemblies, cocktails, corporative celebrations, with its capacity of about 100 delegates.