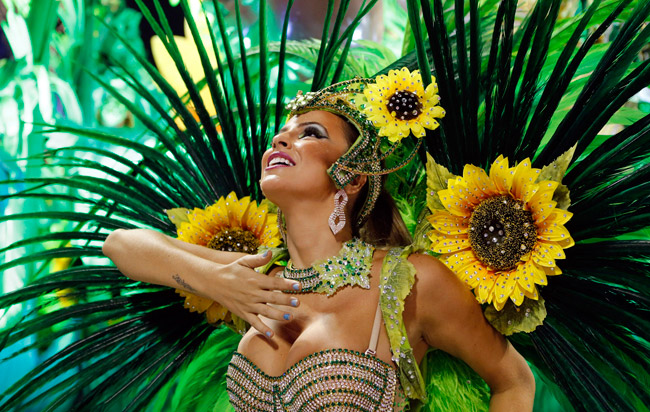 Rio Carnival is annual event held in Rio de Janeiro, Brazil. This year’s Carnival was held from 8th to 12th February 2013, but the preparation for 2014 is already in progress.
The highlight of Rio Carnival is undoubtedly the Rio Carnival Parade called the Samba Parade or Samba Schools Parade, a totally unique event in the world. More than 72,000 spectators jammed into the Sambodrome to watch the spectacle of samba school floats, dancers, and extravagant costumes during Carnival. Even more people, millions of locals and visitors, took part in the many street parties, dancing and drinking into the wee hours of the night. 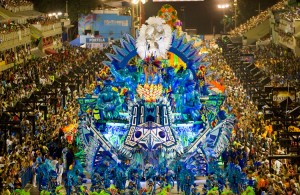 Rio Carnival has become world-famous through the Samba Parade, a show, a display and competition of the Rio samba schools, of which there are nearly 200. The judges and spectators watch the principal parades in the Sambodromo, which is especially built for this event.

* Around 2 million people per day are expected to be on the streets.

The Sambodromo comes to life during Carnival. It becomes truly magnificent and overpowering, lit up with special effects on Samba Parade nights, filled with thousands of cheering spectators and surrounded by many other thousands who could not get in.

It is currently under reconstruction and will hold around 90,000 spectators from 2014 Carnival onwards, to accommodate the ever-growing Rio Carnival Parade and for the opening ceremonies of the 2016 Olympic Games.

*A quarter of million jobs were created by Carnival and it generated £420 million for local hotels, restaurants and bars.

There are 4 different parades in the Sambodromo. 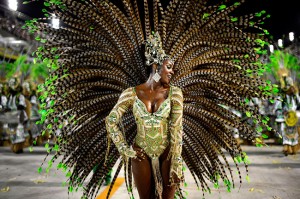 1. Samba Schools in the Special Group

This is the “THE” Parade, the highlight of the Rio Carnival, the must-see show which has made Rio de Janeiro the Carnival capital of the world.

The schools in this group are especially magnificent and sumptuous.

The 6 best samba schools of the Special Group, parade in all their splendor once more, with fireworks.

These are branches of the big samba schools, formed by children of each community. Their parade follows the procedure of the big schools. 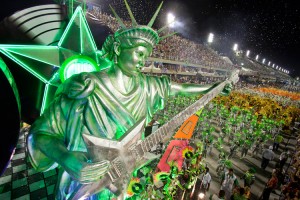 The Rio Samba Schools are associations or social clubs, representing a particular neighborhood of Rio de Janeiro in the annual Samba Parade. They are not samba teaching institutions as their name might suggest. The Rio samba schools are at the epicenter of the Carnival culture in Brazil and much of the “samba world” revolves around them.

Their main objective is to prepare for and compete annually in the Samba Parade.

*Samba Schools have a flag, a color-scheme and devoted (usually life-long) supporters.

They have a flag, a color-scheme and devoted (usually life-long) supporters. They clearly resemble modern corporate organizations, with several departments, sub-divisions, strategic partnerships and apply strong marketing technics. They have a fan group of enthusiastic supporters, official headquarters, workshops in Samba City and rehearsing samba halls, where followers meet, prepare for the next Carnival’s Samba Parade or just spend the night dancing away.

One of the best is Beija flor samba school, which name means humming bird. It is a beloved and omnipresent bird in the Rio region. The school is based on the outskirts of Rio de Janeiro, in a place called Nilopolis. It is currently ranked the highest among all Rio samba schools. It imposes strict rules and has the highest expectations towards all of its parading members. It began its recent winning streak in 1998 and won again in 2003, 2004, 2005, 2007, 2008 and 2011. It is well-known for its creative extravagance and powerful colors.

*There are nearly 200 Rio samba schools in parade. 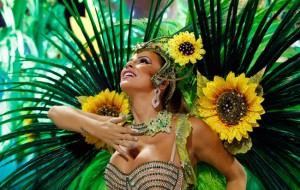 The carnival is all about dressing up, and it doesn’t matter how under-dressed or overdressed you are. Literally everything has been used as inspiration for the official carnival parade costumes developed by samba schools.

*The carnival is all about dressing up, and it doesn’t matter how under-dressed or overdressed you are.

In terms of a formal definition of parade costumes at the samba schools, they are figurative outfits worn by wings and float members, and aid as adornments to the theme construction and development.  Wondered and created by costume designers and carnival producers, they are at first elaborated in drawings, the so called “costume design”. The materials used in the costumes are specified in this costume design as well.

Costumes must follow a few “guidelines” in order to present a positive image to the judging panel in terms of the costume relationship with theme and other issues, such as:
•    suit the theme (conception and fitness);
•    be developed with an imaginative creation (originality);
•    be diversified, as to utilization of the theme potential (variety);
•    have an accurate overall look, in terms of confection (finishing);
•    provide a good sensorial impression (effect);
•    allowing favorable color use

*Some of the schools spend up to £3 million on outfits and preparations.