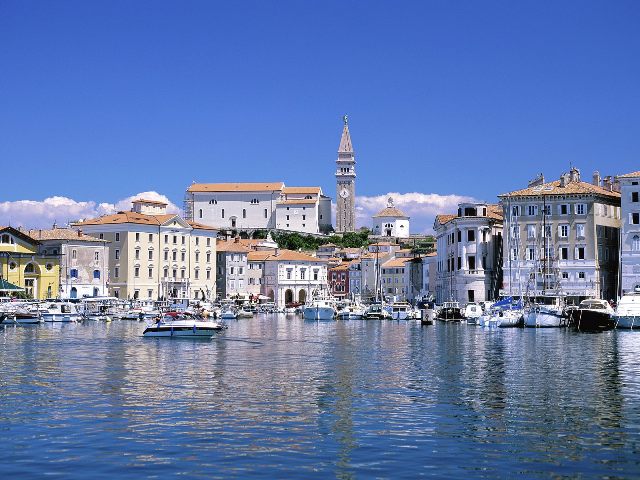 The Adriatic region encircles Slovenian, Croatian and Montenegrin coast, charming shores, islands and bays. Each destination in this region can be reached from the sea, but also from the land, and the majority of coastal towns have international airports. 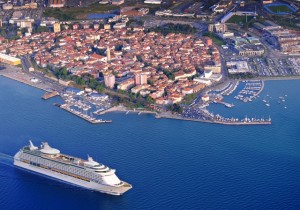 Slovenia, with only 46.6 km of coast, offers everything in small. Slovenian coast includes the towns of Koper, Izola, Piran and Portorož, as the main tourist centres. 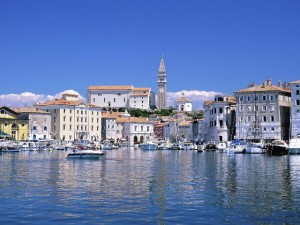 Koper is the only commercial port in Slovenia, and one of the oldest towns. The main landmark is certainly the Old Town with Tito’s Square, narrow streets and the magnificent Praetorian palace from the 15th century. If we continue down the Slovenian coast, we come to Izola, followed by the Piran peninsula, which is a real open-air museum of medieval architecture and a rich cultural heritage.

Portorož, as the biggest tourist centre, offers great number of hotels. There is the town marina, casinos, the congress centre, and a few sport facilities. In the vicinity, in a small town called Sečovlj, there is a Portorož Airport, which makes Portorož an available destination for all foreign guests.

Croatian coast is famous for its numerous islands, clear sea, historic sites and impressive ramparts of the coastal towns.

The very western part of the coast is the peninsula Istria, famous for its terra rosa, red soil, which gives to grape and wine, bread, salad and brandy an inimitable, and yet simple and discrete taste. It is well known for its pruned vineyards and olive yards, from where the view goes all the way up to the mountains peaks. The town of Hum, according to the Guinness World Records, is the smallest town in the world, and another attraction of Istria.

Those who approach and visit Istria from the west and by boat, will enjoy splendid destinations such Poreč and then Rovinj, and its coast protected as the natural heritage. This part of cruise around Istria can be ended on islands and the National Park of Brijuni.

Going further to the central part of Istria, we come across the town of Pula, the biggest town with the famous Pula Arena, wherefrom we continue by coast and the roads of history to Opatija. In Opatija, one should certainly use the opportunity of getting to know the rich history and picturesque scenery of this town. It was exactly in Opatija where some of the first Adriatic hotels were built, thus it has been a popular destination even since the 19th century, when the Hapsburgs turned it into their favourite destination, where the members of the European aristocracy and nobility could enjoy peaceful and quiet moments, far from the palaces and politics.

Just next to Istria, there is a town of Rijeka. This town offers a wide range of opportunities; one can have a coffee in pedestrian zone, take a walk and visit city museums, visit the fortress of Trsat, above the town, but also take part in intriguing festivals and the most vivid carnival in Croatia.

To make escape into the sea depths, an excellent choice would be to take a catamaran cruise, or a ship cruise and to visit the nearby islands, which are the vitality island of Lošinj and the golden island of Krk. One interesting story about Krk is that throughout the history, it was somehow linked to number 7; it was in the 7th century that the Croats inhabited the island, the 7th duke Frankopan was the last duke of Krk, and it was exactly 7 times that the island successfully resisted the attack of the pirates.

A place on Croatian coastal map and a part of their touristic offer that must not be missed is Zadar,

the next destination on the way down the coast. The town of Zadar, a mixture of the past and all conveniences that a modern traveller may require, offers diversity of tourist attractions such as: ideal accommodation, autochthonous gourmet delicatessen, cultural landmarks, modern sport facilities, and rich touristic programs, and certainly represents a destination for relaxation, sport, and recreation. It was some forty years ago that Alfred Hitchcock declared a sunset in Zadar as the “most beautiful in the world”.  There are many tourists that share his opinion, and who had the opportunity to enjoy the view on the hug of the sea, the setting sun and the sky.

Further, down the motorway, it does not take long to reach Šibenik. This town offers a lot of interesting programs, from nautical tourism and golf tourism, to 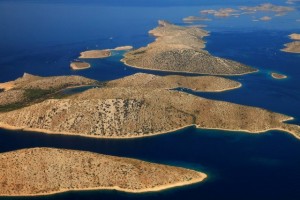 congress and religious tourism. On the other hand, the islands with their picturesque coves, clear sea and the scent of Mediterranean, attract tourists thirsty for a vacation in peace and beauty of the intact nature. There are two national parks in this area: NP Kornati (archipelago with 150 islands) and NP Krka (a river with a lot of cascades).

As for the next town, their citizens will proudly call it the most beautiful in the world and one should not polemicize it, as the town of Split, a town of vivid spirit, will promptly convince all that it is exactly like that. The town is protected by UNESCO and has been registered in the world cultural heritage with the Diocletian Palace; the town has lived its urban rhythm for 1700 years.

From Split, Hvar can be reached by ferry boat, which goes directly into the Port of Hvar. But, regardless the direction that you come from, Hvar, as the town-monument immediately leaves the inimitable impression. Yet, Hvar is not only its monuments, there is a Port of Hvar, Pakleni otoci (the Hell Islands) right in front of the cove of Hvar, its hotels, apartments, healing climate, restaurants and coffee bars, kind hosts, and all the other features that contribute to the spirit of exclusive tourist destination.

The last destination on this way down the Croatian coast is Dubrovnik which does not need some special introduction. Dubrovnik is a treasury and a museum 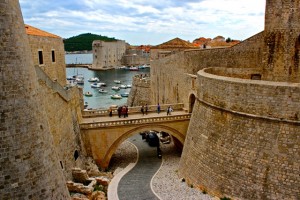 that managed to keep its historic buildings and beauties all until today, as well as many baroque, renaissance and Romanesque churches and palaces. They make an important part of the touristic offer and represent the places that just have to be visited. The town ramparts of Dubrovnik are the main attraction, 1,940 meters long, and include five fortresses, as well as sixteen towers and bastions. Further on, there is Stradun, Knežev dvor (the Rector’s Palace), Crkva Sv. Vlaha (St. Blasius Church), as well as the fortress Lovrjenac, on the west side of the old town core, with the altitude of 37 meters, on the high rock which can be reached from the shore, climbing the path through the woods. With its 260 sunny days a year, Dubrovnik is a favourite and certainly the most famous destination in this region, with the international fame and a good reason to be called a “paradise on earth”.

Montenegrin coast, 293 km long, reflects the spirit of Mediterranean, pebbled streets, old towns of ancient civilizations, botanical gardens which the seafarers granted with plants from all over the world, and the carnival processions and entertainment throughout the year. 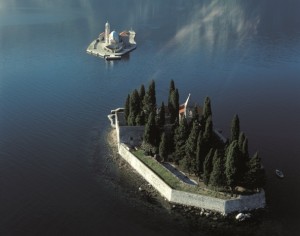 The uniqueness of the Montenegrin coast is certainly Bokokotorski zaliv (the Bay of Kotor) made of four small bays: the bays of Herceg Novi, Tivat, Risan and Kotor. The road around the Bay of Kotor numbers a lot of towns, with the peculiarities that tell a lot, among which there is the town of Kotor, the town of world heritage, with the old town which represents an unavoidable port of many yachts and transoceanic cruisers. For the most luxurious yachts in the world there is a modern marina and resort residences – Porto Montenegro in Tivat. Perhaps the best thing would be to make both, day and night tour, and to visit the small island situated in the heart of the bay.

The main centre of the tourist offer of Montenegro is Budva with Bečići. 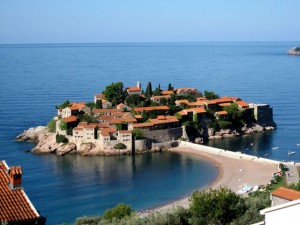 Budva is a summer metropolis, with more than 80 highly ranked hotels, congress centres, exquisite restaurants, and often a destination of Hollywood yachts and a place where the world famous musicians make their concerts. By night, the Old Town becomes an open-air theatre during three summer months, while the bars and restaurants offer entertainment for many different tastes.

Near Budva, by a narrow stone passage, is the island of fairy tales. Streets, roofs, facades of houses and villas retain the original form, while the interior has a most contemporary hotel comfort, which also makes Sveti Stefan the most prestigious summer resort.

The place which all ships visit at least once is Bar, a wide gate of Montenegro. It offers surprisingly rich diversity of cultures, religions, nations, customs and timidity of the nearby villages. The city is famous for its 2000 year old olive tree, in the village of Mirovica, and the museum of architecture, the Ancient Town on the hill, four kilometres from the sea. 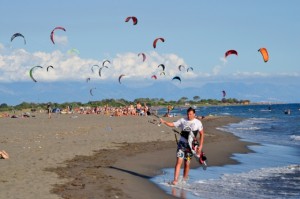 We will finish our tour in Ulcinj and its long sandy beaches. It is recognizable for Ada Bojana, a place where river Bojana flows into the Adriatic sea, and which the nudists characterize it as the ideal place for vacation. Also, Ada Bojana is a prestigious place for windsurfing, and the potentials it offers are satisfactory for both, amateurs and professionals with their strict criteria. Favourable winds make excellent waves which enable surfing and sailing.

This magnificent trip across the Adriatic region, rich of diverse experiences, scents and flavours, with the impressive natural beauties, architecture and culture will not keep indifferent even the most demanding travellers and groups.