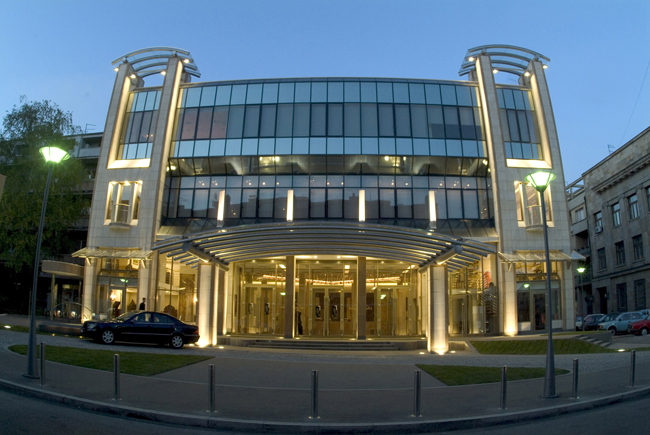 THE WHITE PALACE (BELI DVOR) – together with the Royal Palace, it is part of the 135-hectare estate of the royal complex on the topmost posh area of Dedinje in Belgrade.

King Alexander began the construction of the White Palace in 1934 out of his own private means, as he wished to build a residence for his sons (the Princes Peter, Tomislav, and Andrej), but he did not live long enough to see the works completed.

The Palace was finished under the supervision of the Prince Regent Paul, a great lover of arts, who decorated the Palace with valuable works of art. This structure fascinates people with its simplicity, noble elegance and balanced, symmetrically distributed masses.

The Royal compound in Dedinje was proclaimed cultural wealth and ranks among cultural monuments of exceptional value. As such an institution, the Palace is open to support all kinds of cultural and other sorts of events of particular importance to Serbia.

Probably the most famous part of the White Palace is the Golden Salon connected to almost all other parts of the palace.

Sightseeing of The Royal Compound is made possible thanks His Royal Highness Crown Prince Alexander II and the joint work of the Tourist Organization of the City of Belgrade. Visits are allowed during the tourist season lasting from April to October.  www.dvor.rs

CENTRAL HOUSE OF THE ARMY OF SERBIA – Former JNA Centre (Yugoslav National Army) in Belgrade, erected during the Kingdom of Yugoslavia out of funds collected by royal officers, has a long tradition of organizing ceremonies of all sorts: cocktails, corporative events, theme evenings, company celebrations, weddings and graduations.

The Army Centre offers a top quality affordable service in the very centre of the city. As part of military institution “Dedinje” Company, the restaurant seats 300 persons, and the Centre’s ceremonial hall (400 seats) on the first floor can also be used. www.vudedinje.com

It is situated at the strategic crossing of roads leading from the West to the East, and from the North to the South. Domvs Scientiarvm represents an exceptional destination with multiple roles, both in the business and the scientific sense.

It is a composite part of an inseparable whole, together with the Roman town and the military encampment.

Domvs Scientiarvm is a gem of the specific and unique tourist offer in an authentic Roman setting. By admitting visitor tours, organizing congresses and theme conventions, the complex is expected to turn profitable, thus creating funds wherefrom further research and development of the archaeological park would be financed.

The total surface space is 3.701,36 sq. m., which may be a challenge for event organizers, but also provides for many imaginative happenings. www.viminacium.org.rs

NIŠ FORTRESS – In its centuries – long history, the original Niš Fortress, where the present Turkish fortress is today, was under the rule of many a conqueror, beginning with the Romans whose Emperor Constantine was born on the outskirts of the modern city of Niš, continuing with Stefan Nemanja who held his court there for a certain time by the end of the 12th century, to the Osmanlis who conquered it in 1395.

The Tower is composed today of numerous tourist sites, with souvenir shops, art galleries, restaurants, and a summer stage, which is a specific cultural centre in the city during the summer season.

Apart from the summer stage, the Tower is characterised by its greenery, interesting paths and exciting ditches, like an inspiration for the organization of team building, music events, exhibitions….

MADLENIANUM OPERA & THEATRE – was established in 1997, being the first private opera house in this part of Europe. Immersed in the setting and spirit of old Zemun, Madlenianum is the centre for cultural and artistic events in this part of Belgrade.

With its imposing appearance, style and elegance of its interior, with exclusive performances and supreme stage technique and equipment, the venue meets the highest European standards and requirements.

Inner big theatre, where a brand new ring of box seats at the gallery level was added to the main floor, has the total capacity of around 500 seats. www.madlenianum.rs

O3ONE ART GALLERY – is a unique spot at an exclusive location in the most elite Belgrade quarter, in close vicinity to the National Assembly and the Assembly of the City of Belgrade, looking onto a park.

It can be an ideal place for gatherings concerned with presentations or press conferences, for organizing cocktails or parties.