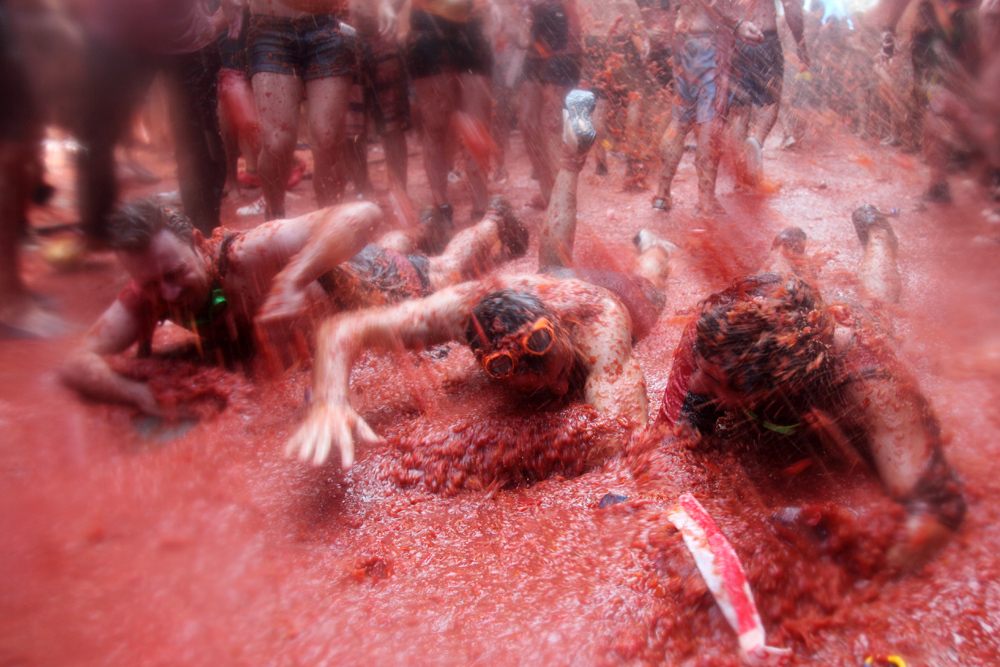 [quote_box_center]Beside entertainment, festivals are a meeting point of culture, customs and traditions of a particular destination. In accordance to that, such events provide authenticity and recognizability for locations where they are held, as well as memorable experiences and impressions for visitors. Let us introduce you with European festivals that stands out by its creativity.[/quote_box_center]

This festival is annual event that takes place on the last Wednesday in August, and this year the 70th tomato throwing festival was held.

La Tomatina takes place in Buñol, a small town near Valencia. Since there is a great interest in this event, since 2013 official ticketing limited the number of participants to just 20,000, because this town does not have enough capacity to host more lovers of this unusual festival. During the festival, all local shops, stores and windows are covered with plastic shields, protecting them from the tomato “fight”.

Interesting fact
Buñol is not famous for tomato growing; furthermore, it is famous for cement, so tomatoes are specially imported for this occasion.

Festival dates since 1945, and no one is really sure how it all began.

There are different speculations and versions, and the most interesting story is the one on how the citizens were unhappy with the local authorities, and during the town celebration they started to throw tomatoes on councilmen as a sign of protest, which continued in years to follow.

Festival always starts on 11 a.m. when trucks loaded with tomatoes are parked in the city central square, Plaza del Pueblo.

Technically, the festival starts when one of the visitors climbs to the top of a two-story high, greased-up wooden pole and reaches the coveted ham at the top. However, since this is a tough job, anxious participants usually begin their tomato fights sooner. 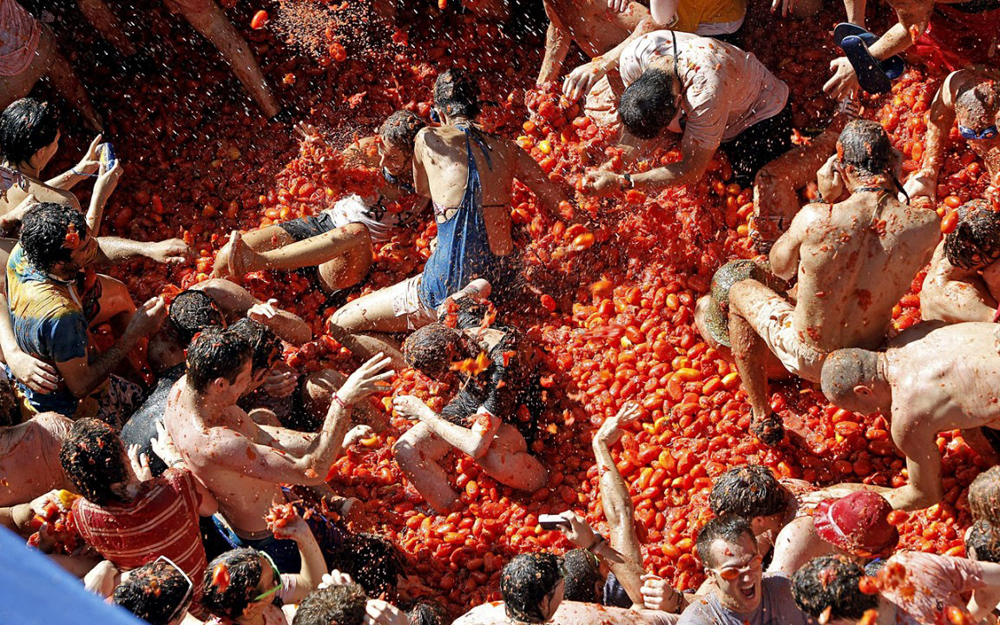 The rules of the festival or “tomato fight” are strict and participants have to follow them. After one hour the fighting ends no more tomatoes can be thrown. The cleaning process starts immediately after the festival, and visitors often jump into the Buñol River to wash away the “fight” traces.

The Scottish Highland Games is the most popular event in Scotland, both for local residents and for visitors from different countries.

Tossing the Caber is the oldest and the most popular athletic discipline.

Games are held from May until September on many locations in Scotland, but also on many other locations in the world, where Celtic and Scottish culture and tradition are honored.

The Games developed in Victorian times, after Scotland achieved independence. They originally consisted of sport and athletic competitions, and the thing they were recognizable and remained by is the famous “Tossing the Caber”. In musical competitions, the most common is the competition in drumming.

Highland Dancing
Highland Dancing, with Highland Fling as the most popular dance, was originally danced only by men, and it reflected the imitation of deer courtship.

In the late 19th century, Jenny Douglas was the first woman to apply for the dancing contest and in the following years, women contests were held.

Highland Dancing is a very demanding dance that requires much exercise and experience to perfect it.

Tossing the Caber is the oldest and the most popular athletic discipline. The caber is a large wooden log, 5 or 6 meters long and weighing up to 60 kg. The participants have a demanding task to lift the caber, balance it and throw it as far as possible.

Throwing the Hammer is another trademark of Scottish competitions. The Hammer is a metal bowl weighing 7 or 10 kg, attached to the end of a shaft, and it is similar to the hammer throw as seen in modern-day track and field competitions.

The winner is the person who throws the hammer to the greatest distance, and women are allowed to participate.

During the summer, Highland gatherings take place across Scotland, with Braemar Gathering as the finale held at Braemar on the first Saturday in September and is traditionally attended by the British Royal Family.

The largest games are Cowal Highland Gathering, better known as the Cowal Games, held in August in the town of Dunoon. These games bring together the largest number of visitors, around 20,000 with about 3,500 participants.

The Scottish Highland Games are spread around the world, since the Scottish migrants retained the tradition, culture and customs. The Games are also popular in America and Canada. 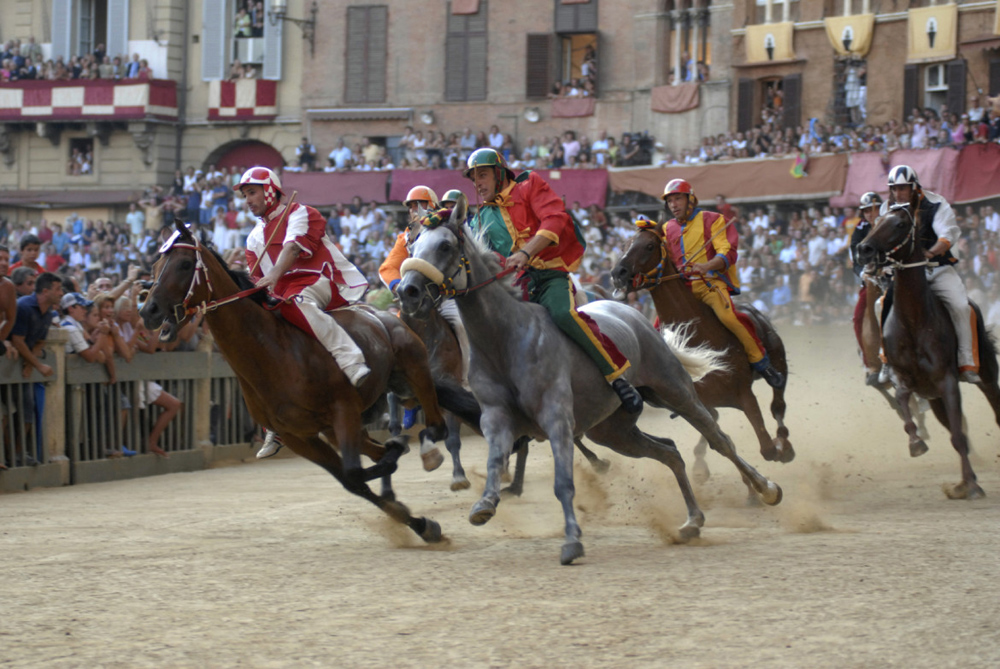 The Siena is divided in 17 rivalry city wards (contrade) joined by the shared passion to win Il Palio. Every county functions as a separate town. The rivalry among the “contrade” is passed from one generation to another since the 12th century. The honor and fame of the county that wins Il Palio has a far greater significance to residents of Sienna, than just winning a horse race.

More than win
The winning at Il Palio is more than just winning a horse race, it is the honor and fame of the county.

It is common for some of the jockeys to be thrown off their horses while making the treacherous turns in the piazza, and indeed, it is usual to see unmounted horses finishing the race without their jockeys.

The most successful contrada is Oca (the Goose) that won 63 races. The contrada that has been the longest without a victory is nicknamed Nonna (grandmother).

The counties prepare for this event thorough the year – they develop their strategies, jockeys train very hard, donations are being collected, media campaigns conducted, all so that fame and glory would be justified, and Il Palio won, since it represents the essence of Sienna and its residents.