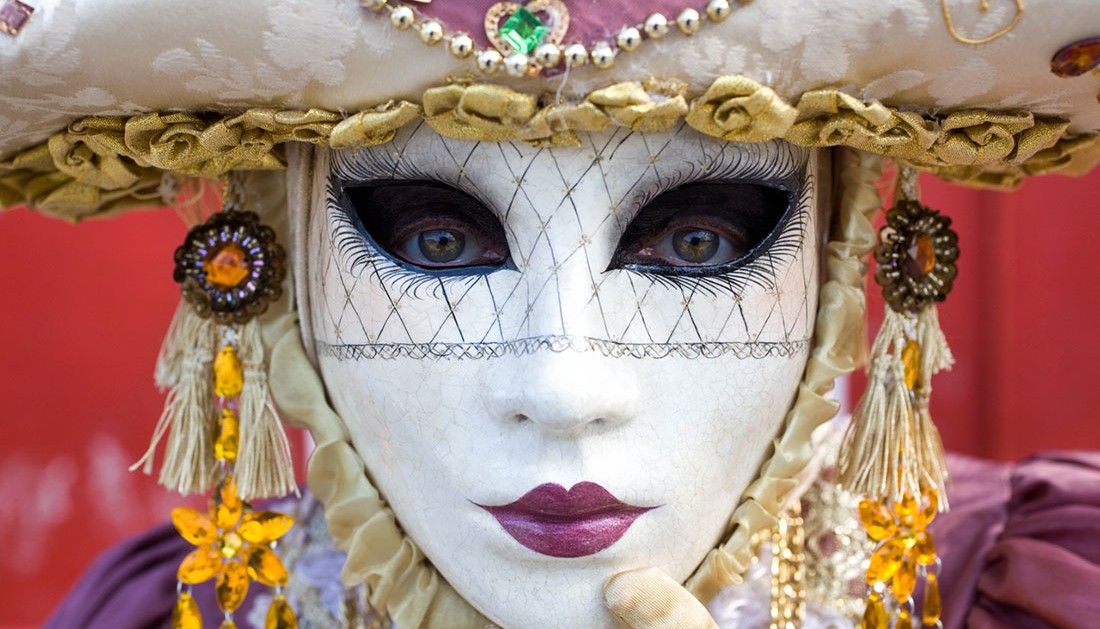 Wearing masks implied equality, freedom, escape from reality and enjoying vices. Everyone was getting the opportunity to be someone else, at least for a short time, and to enjoy the role they chose to play.

Today, during the Carnival of Venice, which lasts a little bit less than three weeks, the visitors can choose to attend some of the numerous thematic balls that take place each day in lavish Venetian palaces.

The visitors can also experience the carnival spirit and freedom that the former Venetians celebrated at the
squares, bridges and canals, where diverse performances and events were organized.

Just like Venice itself, the carnival festivities have long tradition and history. History of the carnival is linked with the victory of the Republic of Venice  over Aquileia in 1162.

The victory was celebrated at the St Mark’s Square where a great festivity was organized, which is considered as the beginning of the carnival. The first written documents about the carnival date from the year 1296. The date of celebration of carnival festivities has been changing throughout the years.

During the last three decades the carnival has been organised in January and February, when Venice becomes the city of masks, colours, excellent fun and very good mood. The specific feature of the carnival is that the events do not only take place at squares, but also at great number of canals, off-streets and bridges, where the visitors are animated by different entertainers, musicians, magicians and acrobats.

This year, the Carnival of Venice was held in a period from 31st January to 17th February 2015.

The masks are made of paper or leather, decorated with plaster details and gold plate, precious and semiprecious stones and manually depicted.The central event is taking place at the St Mark’s Square which turns to magnificent stage, full of luxurious masks, suits and costumes, that the people taking part in the carnival conceive and design months in advance.

During the carnival, theatres and halls organize concerts, plays and various manifestations for which the tickets must be booked in advance, and the price goes up to several of hundreds of euros.

THE HISTORY OF THE CARNIVAL

Wearing masks was everyday practice of the Venetians. At the beginning of the 14th century, various restrictions of masking and disguising came into force.

Masquerades were often banned, which influenced the development of the carnival itself. In 1608, a law was passed, and it allowed masquerades only during the carnival and the official banquettes. As the moral values of Venetians were alarming, drastic penalties for violation of these rules were prescribed.

The provisions from the years 1699 and 1718 prescribed prohibition of wearing masks during the lent and religious festivals taking place during the carnival.

Weakening of development of carnival festivities starts with the fall of the Venetian Republic at the end of the 18th Century. The modern history of the carnival is reckoned from the year 1979, when the carnival becomes one of the main and the most interesting attractions of Venice, as well as one of the most extravagant carnivals of the world.

The masks are the token of Venetians and have great significance for their culture and history. Wearing masks implied equality, freedom, escape from reality and enjoying vices. Everyone was getting the opportunity to be someone else, at least for a short time, and to enjoy the role they chose to play, but, although it was a general belief that under the mask everyone is equal, only the chosen ones could attend ballroom festivities and private masquerades.

It was considered that the original masks were created only by the Venetian artisans, who were prominent artists highly appreciated by the society. There are various types of masks worn at the carnival, of which the most famous are the following:

Bauta is the most popular Venetian mask covering upper part of the face and the cheeks, it is possible to talk, eat or drink, but the mask completely covers the identity of the one wearing it. In the 18th century, it was obligatory to wear this mask at the certain political gatherings.
Bauta was most often worn only by men, in combination with the black three-brimmed hat.

Columbina mask covers only eyes, nose and upper part of cheeks. It was worn only by women, but nowadays it is worn by men as well. Gold, silver, crystal and leather are details adorning this mask.

Medico della peste with its white “beak” is the most bizarre and the most recognizable Venetian mask. Its original purpose was to protect from infections and diseases, and later people started to use it as carnival mask as well. Today, these masks are produced with much more details and decoration than in the past.

Moretta (Servetta muta) is female oval-shaped mask, with velvet and veil. Women wearing this mask could not speak, as the mask did not have the opening for the mouth, only for the eyes.

Larva, also known as volto mask, is the typical Venetian mask. Most of these masks are white coloured and worn together with three-brimmed hat and gown. This mask is made of wax and fine fabrics, it completely covers the face and hides the identity of the person wearing it.

Festival on the Carnival Thursday

The Angel’s Flight represents traditional happening in honour of the young Turkish acrobat who, in order to make a sensation at the carnival, descended down the rope stretched between the ship anchored near the St Mark Square and the church bell tower. This very quickly became one of the most interesting happenings of the carnival, and the custom has been kept all until nowadays. As the people performing this “flight” were disguised as angels, the event was named the Angel’s Flight.

Last Day of the Carnival

The last day of the carnival was particularly feted among the Venetians, as those were the last days of freedom, before going back to their everyday lives. The festivity was taking place at the St Mark’s Square, and in off-streets, torches were lighted all around the city, people were dancing, singing and feasting.

The bells of the church San Francesco della Vigna, would announce the end of the carnival and the beginning of the great lent. This winter, as any other winter, the streets, squares, canals and bridges of Venice were disguised as imaginative Venetian masks and costumes. The entire city was dancing in the rhythm of the carnival festivities.

The Grand Theatre, great stage at the St Mark’s Square, was traditionally the place of central events, various performances choreographic and music performances.

The opening ceremony of the festival La Festa Veneziana was held on 31st January, and the famous parade of boats across the canal Grande started the day later. At the St Mark Square, in a period from 7th to 17th February, the contest for the best carnival’s costume took place.

8th February was reserved for traditional happening, Volo dell’Angelo/ the Angel’s Flight. Only one day before, the happening Festa delle Marie took place, where 12 girls were selected in memory of the Venetian doges who were, once a year, choosing 12 beautiful, but modest girls, and gifting them with jewels and dresses.
For this year’s exclusive festivities, for which the ticket price went up to several hundred euros, the organizers announced numerous interesting events, of which, as tradition, stands out great glamorous masquerade ball on the love day – The Saint Valentine’s Masquerade Ball.

This year’s St Valentines Masquerade Ball was held in the Venetian Palace situated at the beautiful Grand Canal. The host of this masquerade was none other than Casanova himself, with his attendance from the famous play Commedia del’ Arte. The hosts, dressed in luxurious Venetian costumes, with the music and the atmosphere of the lavish palace, evoked this feast for the visitors.
All the guests of this precious ball had the privilege to enjoy the palace in which masquerades have been organized for hundreds of years.

This year, with its diverse program, Venice again justified the expectations of many tourists who were hiding their faces behind the colourful masks and lavish costumes.
The carnival atmosphere reigned in all Venetian streets and squares.