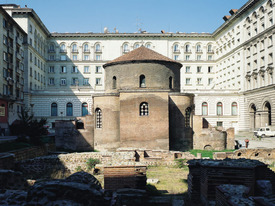 the Great is unearthed and exhibited in the downtown have. Sofia will have new special archeological attraction for tourists next year – a Roman palace which is currently buried under the Sheraton Hotel in Sofia downtown. The ancient palace of Constantine the Great (306 – 337) will be unearthed next year, said Sofia’s Chief Architect, Petar Dikov. He suggested that the ruins may be exposed under a glass roof, thus Sofia would be likened to Rome.
The square in front of the Sheraton Hotel will be allowed for pedestrians only and the parking lot will be removed. Today this parking lot is owned by the municipality and the hotel and is nothing but broken pavestones and flower pots, Dikov said.  The remnants of the palace of Emperor Constantine spread from the hotel to St Nedelia Church and the President’s Office, outstanding historian Bojidar Dimitrov told the Standart and added that it was very likely that in the 8th century Khan Krum slept in the palace that was then known as the city residence.