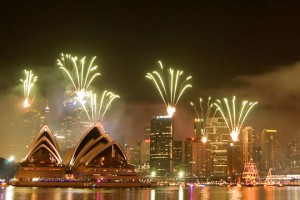 The final touches are being placed on the world’s biggest and most spectacular New Year’s Eve party as Sydney prepares to party into the new decade and welcome 2011!

Facts about organization speak for themselves. Some of them are: 15 months of hard work go into designing and preparing Sydney New Year’s Eve each year; 97 accredited personnel work on the night of the event to ensure everything runs smoothly, with 300 volunteers also pledging their time and support to help with Sydney New Year’s Eve; the night begins when the words “Welcome to Sydney” are projected on the pylons of the Sydney Harbour Bridge in English, Gadigal, Arabic, Cantonese, French, Greek, Hindi, Italian, Korean, Russian, Samoan, Spanish, Dutch, Vietnamese and Swahili, the fifteen languages of Sydney’s top migrant populations and tourist visitors for the event; Fourteen 20-foot shipping containers full of pyrotechnics were needed to put on the show – that’s 120,000kg of equipment; there were 130 firing points on the Sydney Harbour Bridge itself… And, 50 illuminated boats made a majestic passage within and around the Sydney Harbour Exclusion Zone after the 9pm show, heightening Sydneysiders’ excitement before the countdown to midnight.

“I can already see people setting up around our stunning Sydney Harbour for Sydney’s party of the year and I know they’ll be absolutely blown away by tonight’s breathtaking display,” said Lord Mayor Clover Moore MP the day before celebration. 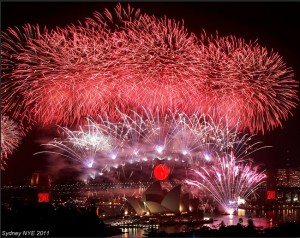 A giant handprint made its mark on iconic Sydney Harbour Bridge as another breathtaking fireworks finale welcomed the new decade.

“What a remarkable start to 2011! Last night’s amazing Sydney New Year’s Eve celebrations demonstrated just why Sydney is the New Year’s Eve capital of the world,” said Lord Mayor Clover Moore MP day after the celebration.“We were the first major city to ring in the New Year and our unparalleled 9pm Family Fireworks, Midnight Finale and Bridge Effect delighted more than 1.5 million people who lined the harbour for Sydney’s party of the year!”

The Lord Mayor said the display helped Sydney make its mark on the world with a global television audience of 1.1 billion viewers from 160 countries. Live coverage was fed through the BBC, CNN and the Chinese broadcaster CCTV. The Lord Mayor paid tribute to the Sydney New Year’s Eve team, which spent 15 months planning and preparing the event, and to 345 of the City’s cleansing, waste and parks staff who worked throughout the night and today to collect 56 tonnes of waste after the large crowds dispersed. About 80 per cent of the waste will be recycled.