When we think of robots, our mind usually goes to those that have human form seen in movies. From Robocop, Transformers, and the famous Terminator to C-3PO  from Star Wars.

However, robots are much more than that. And their use is much broader. With this in mind,we wondered what this field looks like in Serbia. We talked about this and many other topics with Dr Aleksandar Rodic, the head of the Robotics Laboratory at the Mihajlo Pupin Institute and vice-president of the Institute Assembly in Serbia. Dr Rodic has authored more than 100 scientific publications, six research monographs, edited a number of scientific books, and he serves on the editorial board in several international and national scientific journals. His main research areas of interest – among others – include robotics, artificial intelligence, and mobile renewable energy sources.

His most important acknowledgment is that which he received in March this year – awarded by the head of China’s Anhui Province himself in the city of Hefei – for significant contributions in scientific and business cooperation.

The Robotics Laboratory of the Mihajlo Pupin Institute in Belgrade is a regional leader with outstanding reputation throughout Europe. How much are we on par a with Europe? Are we behind – or perhaps ahead – in the domain of robotics development and application?

The Mihajlo Pupin Institute’s Robotics Laboratory is one of the world’s oldest robotics laboratories. It was founded in 1967 by academician Miomir Vukobratovic, a world-renowned robotics and one of the pioneers in the field of robotics. In keeping with the rich history and scientific results achieved in the laboratory’s 50 years of existence, the Robotics Laboratory is one of the most successful centers of excellence in this field – not only in Europe but also in the world. Many famous robotics cite the works and results of our valued associates.

Our laboratory experienced a difficult period during the 1990s, when we shared the fate of our nation and literally struggled to survive. In that period, we lost a significant number of our outstanding associates who today are renowned scientists and leading managers on all continents. Nevertheless, the Robotics Laboratory survived, and it continues its efforts with notable success as an equal partner to leading European academic institutions in international
projects with Germany, China, France… 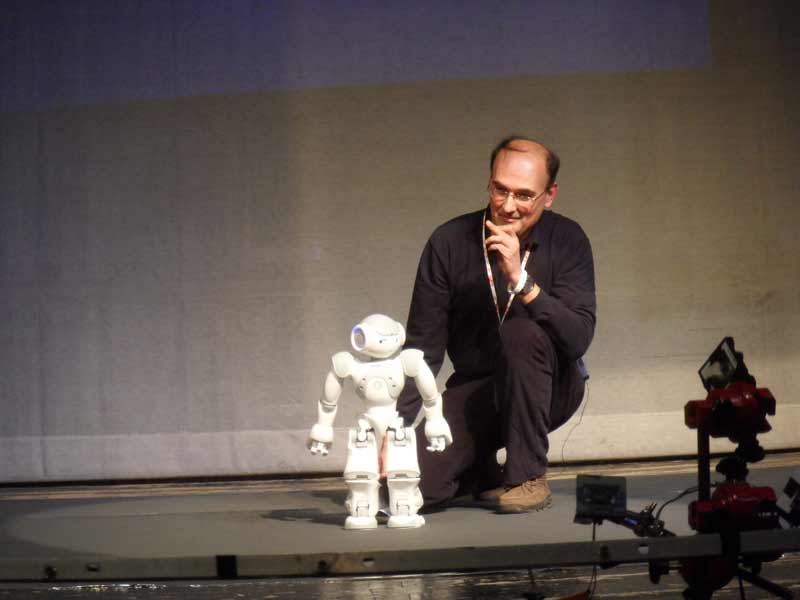 On the national level, the Robotics Laboratory is promoted on regular basis through new technological innovations and projects that are challenging even for much more developed European countries. The Laboratory’s associates have knowledge and skills that are far from behind that of their colleagues in developed European countries, which is why we are always invited to participate in various scientific boards and expert committees. We could say that we mainly lag behind in the availability of tools and devices since the science of robotics is very demanding. We manage to overcome this handicap thanks to international networking by testing our knowledge and results in collaboration with our colleagues and partners from wealthier Western universities.

Fortunately, this model works well and – until conditions improve – enables us to be very productive and noticed on Europe’s research map.

The Mihajlo Pupin Institute’s Robotics Laboratory, which is under your management, is a member of EURON and EUROP. Taking into account your international reputation, knowledge, and experience, last year you had the honour – as well as responsibility – of hosting RAAD in Belgrade. Can you tell us more about the event and the participants’ impressions?

Thanks to our very active commitment to international cooperation – both with European scientific institutions and with Chinese universities – we have earned good international standing and joined several international scientific committees. As a result, last year (2016) we hosted the biggest scientific robotics event that ever took place in Serbia. The event was
the noteworthy 25th International Conference on Robotics in Alpe-Adria-Danube Region (RAAD2016).

The event brought together around 80 robotics experts – mostly from Europe, in addition to guests from Japan and the US. The two-day event’s participants enjoyed interesting lectures, as well as an exciting social and entertainment program. The conference slogan was “Conference on the Danube River”, which placed emphasis on the beauty of our country and Belgrade and the Danube’s European significance in connecting people and scientists in the region.

This year’s RAAD2017 was held in Turin (Italy) and many of our colleagues from abroad noted the great success of the past year’s conference in Belgrade with lots of emotions and good memories. It is nice to hear such praise because it contributes to Serbia having greater authority internationally.

What is the most important project you are currently working on?

It’s hard to say which project is currently the most important for us, considering that we are working on several at the same time. Financially, these definitely include projects that result in new devices intended for the market. This summer we were very active in promoting our new portable robotic solar generator – an irrigation device that uses renewable energy sources. Our goal was to provide Serbia with a technologically advanced device that would mitigate the consequences of this year’s drought in a relatively short period of time.

On the other hand, we have two projects that are currently the most important in terms of science and technology. The first one concerns the development of an underwater robot for the Danube and Sava rivers that is designed to help in rescue operations as well as in ecological and underwater archeological efforts. We are working on the second project in collaboration with the Anhui Province’s university. Together, we are tackling the development of a remote-controlled, solar-powered, mobile ecological service robot, which is meant to be used for prevention and first response in industrial hazards and natural disasters. These robots are highly sought after in today’s world – especially after the nuclear disaster in Fukushima.

Our scientists have specific knowledge in designing these systems, but unfortunately Serbia offers no opportunities to finance such projects and we have to manage in collaboration with
international partners.

Have you ever worked on robots used in the travel industry?

Frankly, not yet, but we do have an interesting project in store concerning the development of robot dragons – a technological version of these mythological creatures. This robot should serve as a meeting ground – a tool that will breathe new life into the legends of the Danubian dragons from the tales of the regional peoples. Our main idea is to use this project to connect these living Danube legends and create a new tourist route in the Danubian countries, which would be called “The Trail of the Danube Dragon Legends”. Robotics is such a wide, interdisciplinary scientific field that has enormous technological and economic, cultural, and social potential. This should be used to fuel the regional economies. 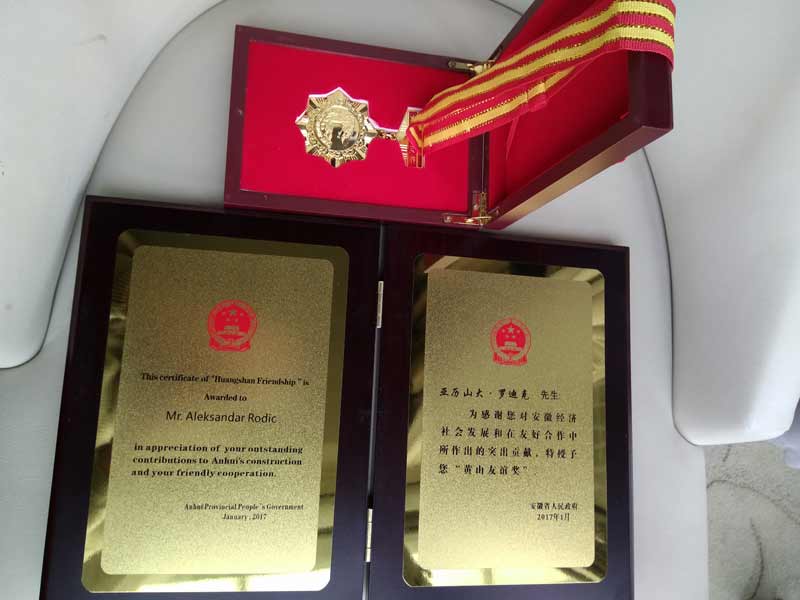 Are there any robots made in Serbia that could be used – or perhaps rented – for event planning? Or any that have the potential for something like this?

As far as I know, there is still no such thing at the moment, but irons are in the fire. Because of the lack of financial resources and interest among industrial enterprises, this idea is progressing slowly, but it will certainly be come to fruition. This is indeed an area of our interest and the goal of a research and development project that we will start in a few months with some segments of the work already completed.

Where is the sentient robot project currently at? 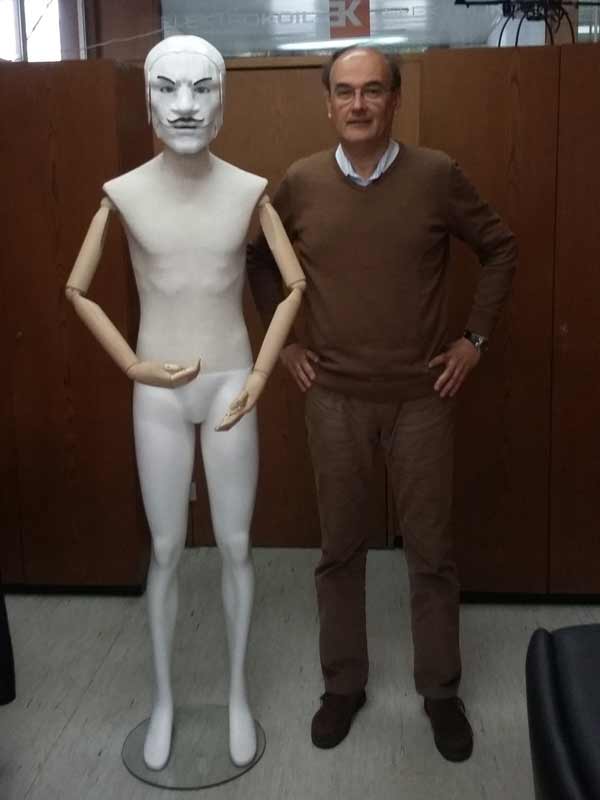 Mathematical models and algorithms for the microprocessor implementation have been developed. We are now verifying the results in experiments in Germany, with our partners from the University of Kaiserslautern. Several of our and German PhD students are involved in this project. However, during the peak of our project, we lost a couple of research associates who went abroad in search of better working conditions. This is our biggest stumbling block. As soon as our young experts finish training and become self-sufficient professionally, we “lose” them. That is the reason why things move slower than they could and would otherwise.

Which is the most interesting robot you’ve ever come across?