The Second International Science Conference on the Bosnian Valley of 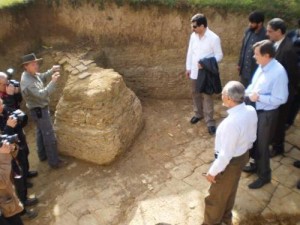 Pyramids – ICBP 2011 was held from September 4th to 11th, 2011 in Visoko, Bosnia and Herzegovina. At the conference took part 25 archaeologists, geophysicists,
anthropologists, historians, physicists, architects and engineers from the USA, Great Britain, Italy, Germany, Austria, Serbia, Slovenia, Croatia, Finland, and Bosnia and Herzegovina. Back at the First International Science Conference on the Bosnian Valley of Pyramids (ICBP 2008), held in Sarajevo, fifty five scientists from 13 countries concluded that “the Bosnian valley of pyramids is an important archaeological site which is to be explored thoroughly.” The goal of this year’s Conference – ICBP 2011, was to give an answer as to what was the purpose of erecting the Bosnian pyramidal complex and of the prehistoric underground labyrinth of Ravna, stretching over dozens of kilometres.