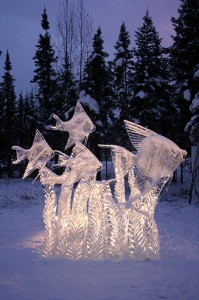 The beginnings of ice sculpture are credited to both China and Russia, and go back centuries.
In the 1600s, native hunters and fishermen of the Chinese province of Heilongjiang, on the border of Russia, designed ice lanterns for dark winter nights. They filled buckets with water to make ice, then slid it out, dug a hole in it and put a candle in the hole to make a lantern. Shortly the trend of making ice lanterns spread and people started hanging decorated lanterns from homes and parading them in carnivals.

On the other hand in Russia in 1740, the first monumental scale ice palace was commissioned by the Empress Anna in Russia. Designed by Piotr Eropkin, this palace featured, among other things, ice cannons that fired ice cannon balls, and an ice elephant linked to a canal through pipes thath sprayed water out of its trunk. Since then, complete ice towns have been built in the northern cities of Russia. Russians claim that St. Petersburg was the place where ice sculpture began. 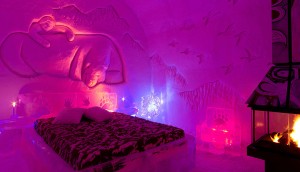 can consist of anything from life-size statues of people and animals to reproductions of castles and working hotels. Finland, Norway and Sweden each have ice hotels, where visitors can stay in rooms made entirely of ice and sleep on beds chiseled from huge blocks of ice. These hotels even have bars and restaurants where food is served on tables of ice, and are illuminated by carved ice sculptures. These hotels have the relatively short lifespan associated with other ice sculptures, and are rebuilt on a yearly basis.

The duration of the Ice Sculptures

Ice sculptures can last anywhere from a matter of moments to months. Those found on the tables at indoor celebrations usually begin melting from the moment they are brought out and put on display, but the sculptures created in areas such as Harbin, China, can last for months.

***
The Sapporo Snow Festival, one of Japan’s largest winter events began in 1950.

The outdoor temperatures in Harbin dip to 40 degrees F below freezing for half of the year and only slightly warmer for the rest of the year, and can sustain the sculptures for some time. The temperature also has an effect on the clarity and hardness of the ice. Sculptures and buildings created in northern Scandinavian climates not only last for months, but can accommodate the body heat of visitors wanting to spend their vacation wrapped in furs while sleeping on beds of ice. Guests can take a break in underground saunas when the cold gets to be too much.

Ice sculpture has found a home in many different parts of the world such as Belgium, Canada, Alaska, China, France, Ireland, Russia, Sweden and Japan. Countries that have 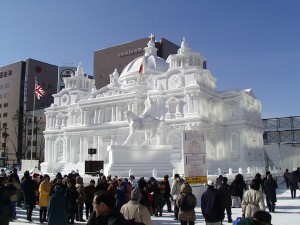 coldest winters are home to the largest ice sculpting events and festivals.

Ice festivals are typically seen in places that get very cold. Festivals in Sapporo, Japan, for instance, feature sculpture on an architectural scale such as ice castles and pagodas. The winter carnival in Alaska has participants from over 100 teams annually, including teams from countries such as China and the United States. In Sweden an ice hotel complete with bedrooms and a bar is built every year.

The most famous festivals:

We can all agree that the ice sculptures have become a sign not only of extravagance, but also of fleeting beauty. In certain ways ice sculptures are also a celebration of the beauty of winter and of the cold, especially embraced in areas with a climate well suited for creating outdoor sculptures in the spirit of nature and the winter. 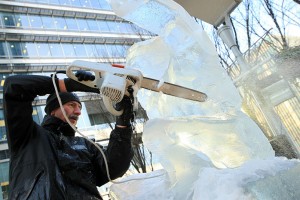