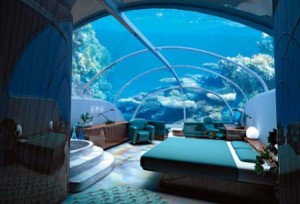 All devotees of extravagant holidays, exotic architecture, diving and underwater world, have a unique opportunity to enjoy in a “new world” – an underwater oasis of tranquillity, the Hotel „Hydropolis“ in Dubai, inspired by Jules Verne’s novel „20,000 Miles Under the Sea“.

This underwater giant was named “The Underwater Resort Hydropolis“, and its construction consumed 600 million US dollars. It consists of a coastal and an underwater part which goes to 20 metres in depth. That part houses two restaurants and a few bars, a beauty salon, spa centre, a jewellery, several boutiques, a dancing hall, movie theatre, and a comfortable conference hall with as see – through dome. For the youngest was constructed “children’s world”, and the entertaining or cultural events will be held in a special open – air above – water hall. One reaches this underwater “empire” from the coast via special cable car through an underwater tunnel 300 metres long, which is transparent on top so the trip to “Hydropolis” becomes magical from the very beginning.

The shape of the hotel is reminiscent of number eight lying on water, with rooms, suites, halls and auditoria situated inside the loops. There are 220 rooms on the enormously vast surface space occupied by this hotel. The ceilings in the rooms give view onto the underwater world of the Persian Gulf, and the cheapest overnight stay costs around 600 US dollars.

The hotel gives view, beside the incredible sight of the underwater world, the starfish or the azure sea and other underwater life, view of the clear sky too, as its peak protrudes above the water.

The rooms, conference halls, concert halls, gambling salons, and swimming pools occupy about 100 levels. The security for the underwater hotel guests is guaranteed by a special anti – missile system