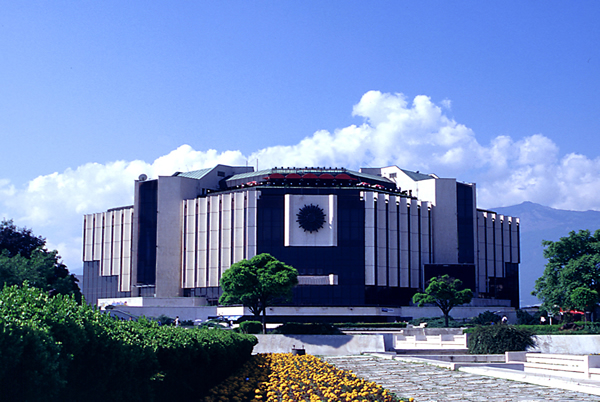 Surrounded by a beautiful leisure park, with a magnificent view of Mount Vitosha in the background, the Congress Centre reflects such a singular personality of Sofia, even in the essence of the building itself.

Winner of the 2008 EBA “European Quality” Award and the 2005 AIPC Apex Award for the “World’s Best Congress Centre”, Member of ICCA and AIPC, the venue was the host of the 62nd Summer Congress of NATO Reserve Officers 2009, the European Philatelic Exhibition Bulgaria 2009, the Energy Summit “Natural Gas for Europe: Security and Partnership 2009, the World Chess Championship Semi-final 2009, the 2006 Meeting of NATO Foreign Ministers, the 2004 OSCE Annual Ministerial Council Meeting, the 2002 Parliamentary Assembly of NATO, and many more.

The venue boasts 15 halls with a capacity ranging from 100 to 4000 seats and 55 meeting rooms. Over the years it has become the hub of an active intellectual and cultural life, whose stages have been honored by Herbert von Karajan, Claudio Abbado, Riccardo Muti, Jose Carreras, Andrea Bocelli, The Bolshoy Theatre, La Scala, The London Symphony Orchestra, The Vienna State Opera and The Royal Swedish Ballet. Vladimir Putin, Pope John Paul II and Bill Clinton are just a few of the dignitaries who have visited the Centre.

Remarkable for its architectural, artistic and functional merits, the venue offers the highest level of services sophistication, facilities and state-of-the-art equipment. With no subsidies from the government the venue is entirely self-supported. As part of its social responsibility program, Congress Centre-Sofia has become the largest public establishment in Bulgaria, which is fully accessible for wheelchairs and handicapped visitors. The venue has also implemented discounted rates for pupils, students and pensioners.

• 2nd Extraordinary Session of the Intergovernmental  Committee for the

Preservation of the Intangible Cultural Heritage of UNESCO 2008

• CEI Summit of the Heads of Government 2007

• 3rd Symposium of Dermatology and Venereology 2005

• 5th Annual Meeting of the Board of EBRD

• Spring Session of the Parliamentary Assembly of NATO 2002