A fourth plinth at the London Trafalgar Square, in front of the National Gallery, that has been decorated with various pieces of art during the last couple of years, is taken by the giant sculpture of bright blue rooster, a piece of art made by German artist Katharina Fritsch. The rooster is 4,72 meters high and has slightly provocative name – Hahn/Cock. 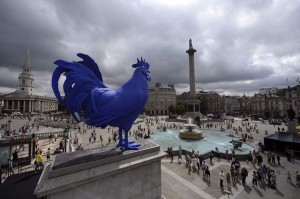 The blue cock will be here for 18 months, and was thought out as a bright contrast to all serious brass statues of kings and generals dominating this space.

Further, this sculpture has slightly humorous note, as the blue and the rooster symbolize France, whose defeat, in 1805 maritime battle gave the name to the Trafalgar Square.

The artist finds some “fine humour” in the fact that the symbol of France is standing on the place which celebrates the victory over Napoleon.

The central Trafalgar square got the name after the victory of the famous admiral Horatio Nelson, over the united French and Spanish armada, and the fourth plinth was built in 1841, for the statue of the horseman, that has never been completed. The plinth was empty for a century and a half, and since 1990, every 18 months, a new piece of art is exhibited there.