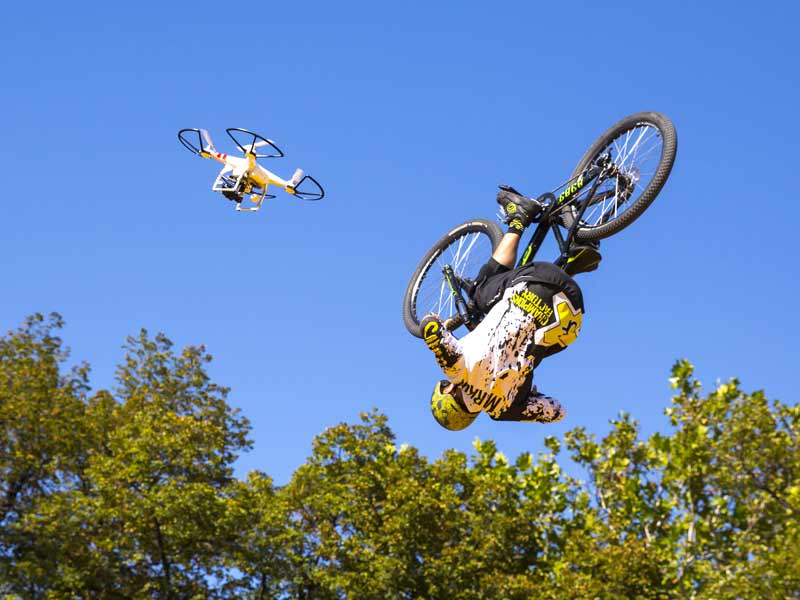 We know that the goal of every event is to leave an impression on the target audience that it is intended for (in case you forgot, please refer to the articles in the last SEEbtm issue 🙂 ). Now imagine the reaction of the attendees when they realize that a “flying” cocktail or camera are approaching from the air.

Creating these – in every sense unforgettable – moments at events is exactly what we, as their planners, should strive for. Precisely this WOW! effect. The traditional video-recording at
events will possibly slowly become a thing of the past because, as of recently, there is a much more creative and appealing way to do it – by using a drone. However, in addition to this purpose, there are many more things that can be done with this device, which can
make your event unique and special. Read on to find out the ways in which these drones can be used in event planning.

Let’s start with the basics: What exactly is a drone?

The full name of this device is Unmanned Aerial Vehicle (UAV), which loosely translated to plain English means “an SUV that is not controlled by a person”- an aircraft without a pilot inside. Using a drone requires a person to control it from the ground and a communication
system between the controller and the drone. Flying can be controlled by a computer placed inside this aircraft, or the entire process can be performed by a person. In the beginning, drones were designed for use in the military industry – in tasks and missions that were considered too dangerous for humans or that needed to be done without anyone’s presence.

However, as time passed, their use became more and more common in other areas: commercial, scientific, recreational, as well as in delivering products, photographing inaccessible parts of the planet, as well as in event planning. Since today in this business (but then again, this goes for every business 🙂 ) online access, and especially Wi-Fi, has become a MUST-HAVE, event planners often have issues with this important item at events that are organized outdoors in large areas. 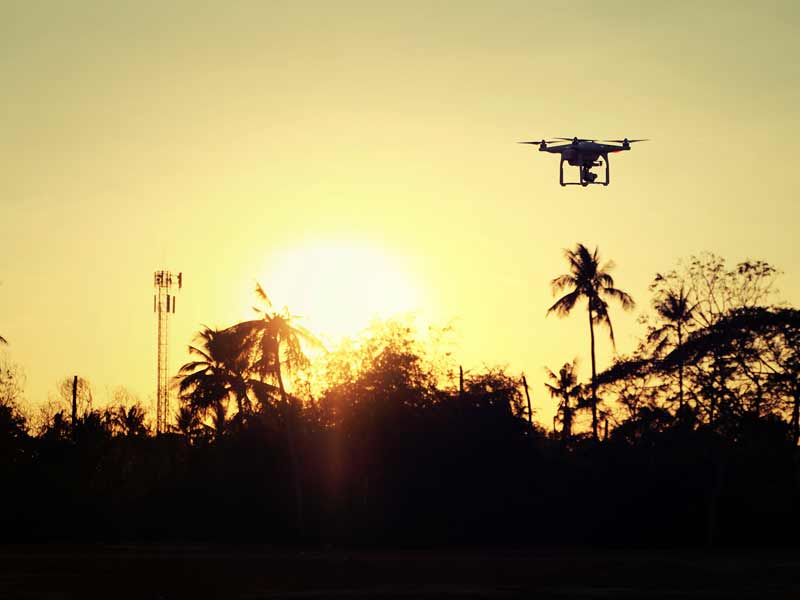 The pressure is even bigger when you add the expectations and desires of the participants, as well as the organizers – to involve as many people as possible at the event in interacting on social media in connection with the event, or to make online access
available for the guests so they can check their agendas on their smart devices or get information about some other things about the event. In most cases, the Wi-Fi signal at the venue can’t (or does very poorly) cover such large territories. Drones are then used as a platform for networking. A Wi-Fi transmitter is attached to them, and while they are flying over a certain area, all users can access the internet. Smart and very practical use. But, nevertheless, there is something that is a bigger issue than not having online access. And that’s security. Especially when it comes to events attended by large numbers of people where it’s difficult to control everything because of the crowd.

For these purposes, special cameras can be installed on the drones, designed to very accurately detect any potential issues when it comes to security. In this way, the drones
actually detect a potentially dangerous situation before it becomes a real problem. There are even indications that in the near future drones will be equipped with systems that will scan huge areas and determine whether there are any weapons around. Such sophisticated technology will be a revolutionary milestone when it comes to security measures at events.

Here’s another very interesting and inspiring use of drones in event planning. Belgian telecommunications company BASE used the so-called party drones at a music festival. Each participant who bought the ticket for the festival online was asked about their favorite song, which they then added to a Spotify playlist. When he or she appeared at the festival, at the entrance to pick up the ticket, the drone would recognize the person (because it was connected with the Spotify playlist) and then fly over their head and play the song that the participant added to the playlist. No need to describe the attendees’ degree of enthusiasm 🙂 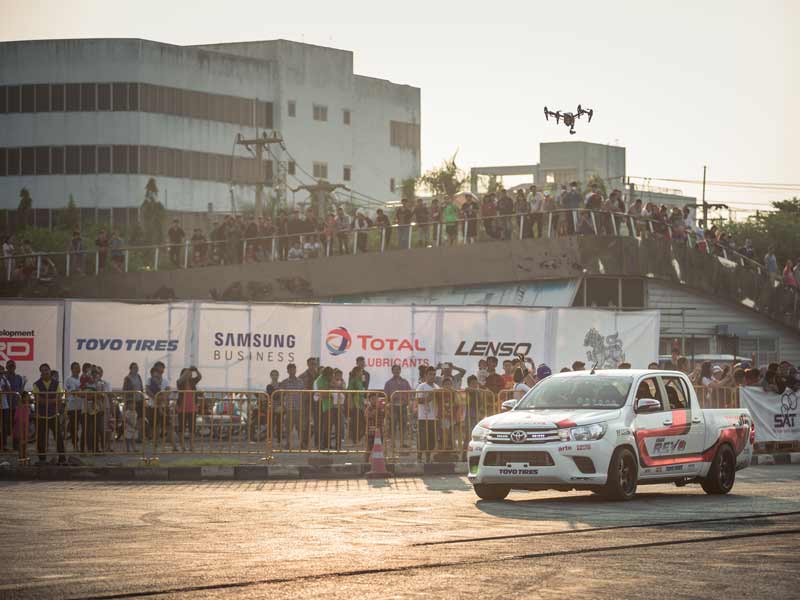 The guests of another music festival that takes place in South Africa used an app on their mobile phones to order beer, and the drinks were served to them by drones! This idea was initiated by the festival organizers and a beer producer. When the bartenders would receive an order, they would place it on a drone that was using the GPS coordinates of the phone from which the order was sent to get to its destination. The only part of the festival where this service was not available was on and around the main stage, where people were dancing in big crowds.

Another creative way to use drones is for marketing purposes. Just imagine how much better it would be for the guests at your event to get – instead of for example branded bags – an unforgettable experience. You can use a drone flying over the entire event to attach a company name, logo, or another message that you deem important to be conveyed to the target audience. Likewise, if you are not able to visit the venue for site inspection, you can send a drone to record it and watch the video from your office. Like a virtual site inspection. Good idea, right? 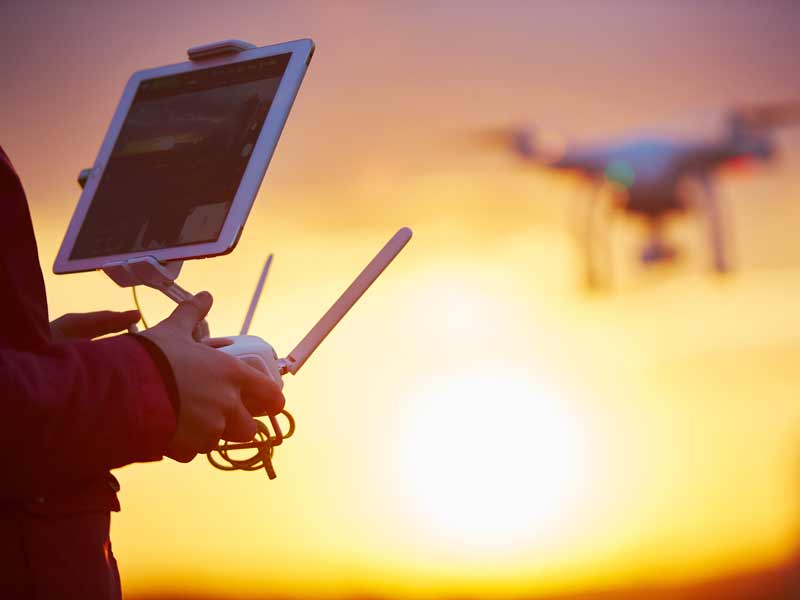 So, if you’re planning to include drones in your next event, here are some tips:

Make sure that drone flying is permitted at the event’s venue. If so, you need to know exactly where the venue is. Sometimes it may happen that using this aircraft is allowed,
but only in a limited part of a venue.

Find out if the person who is renting you the drone has insurance. Why? A device that is not very small in size needs to fly above the heads of the participants. You don’t need any further explanations about what kind of complications might arise. You can never be too careful.

Make sure to ask for earlier shots that were made using the same drone to verify the quality and resolution.

Drones are quite loud and noisy while they’re flying. That, of course, is not a problem when you’re organizing events such as festivals, but do take this fact into concentration if you’re planning a seminar/conference or any kind of event where the participants need to concentrate.

The person controlling the drone needs to get an accurate picture of the venue where the drone will be used before the event itself. The pilot needs to know about any limitations – starting from how much space does the branding take up, where exactly the decorations are placed, when will the lights be turned on and/or off, whether there are any special effects to be used, etc. The pilot needs all this in order to determine the exact route of the drone, the space that will be available.

On top of all this, you should also take into account the details that the drone needs to record – important moments during a session, lectures, perhaps some VIP guests, the mood at the event itself, etc. Keep in mind that drones can’t fly infinitely 🙂 , their usual time is up to 30 minutes without stopping. You guessed it – they operate on batteries that need to be recharged from time to time. That is why you should carefully plan the timeline of the recording and stick to it.