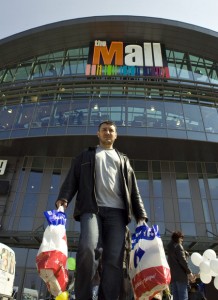 the Balkans called “The Mall”. Welcoming the investors, the prime minister expressed his hope that the state would soon stabilize and consuming would galvanize. The Mall is located at 115 Tsarigradsko Shose, one of the major Sofia boulevards. The Mall spreads on 66,000 square meters which makes it the largest shopping center in the country, and it boasts 186 shops, restaurants, entertainment courts, the first Carrefour hypermarket in Sofia, and parking lot with 2800 spaces. The Mall also opens 1500 new jobs, 400 of which are in the hypermarket Carrefour. According to the owners, Restis family from Greece The Mall is aimed at offering “a new lifestyle to a wide range of consumers – from teenagers and yuppies to family couples with kids and elderly people.”  The new shopping and entertainment center has an Arena Cinema Complex with 10 halls and a total of 1 800 seats, a bowling center, and a gym. The Mall is located on six levels, three of which are underground. It has been designed by architect Ilian Iliev from ‘Planning Studio’, the construction was carried out by the GEK TERNA Group, and the property is managed by Colliers International Bulgaria.